This is the second of Air Commodore Wiseman’s books that entered the public domain this year. My thanks to Book Aid for providing a copy for digitisation.

This book is the outcome of studies in archaeology and Genesis, while working in the land of Genesis – Babylonia. The investigation of the literary problems of the book in its ancient environment, and in the light of the mass of new facts regarding ancient literary methods, throws an entirely new light on the problem of its authorship.

My aim is to state as simply as possible the evidence which the Book of Genesis has to give concerning its own origin and composition. To many it will appear surprising that Genesis has anything whatever to say for itself regarding the method by which it was originally written, for scholars have discussed this very question for the last two centuries, without even suggesting that it contains the slightest direct statement concerning its own authorship…

The works of Air Commodore P.J. Wiseman [1888-1948] enter the public domain this year. This is the first of two of his books that I will be online. Air Commodore Wiseman was the father of the biblical archaeologist Professor Donald J. Wiseman.

A new endeavour is made in the following pages to trace the Biblical creation narrative back to its source and to ascertain why it is divided by six “evenings and mornings”.

Many will doubt whether it is possible-after centuries of discussion-to write anything new about this first page of the Bible. I take however the same view as Butler did when he wrote (Analogy II, iii), “Nor is it at all incredible that a book, which has been so long in the possession of mankind, should contain many truths as yet undiscovered”.

There are several undiscovered truths regarding this first narrative of creation which hitherto have remained unnoticed. One of these is so important, yet so simple and unquestionable, that our failure to recognise it is all the more surprising, seeing that this oversight has created considerable difficulties resulting in continued misinterpretation, causing the narrative to be rejected by so many. 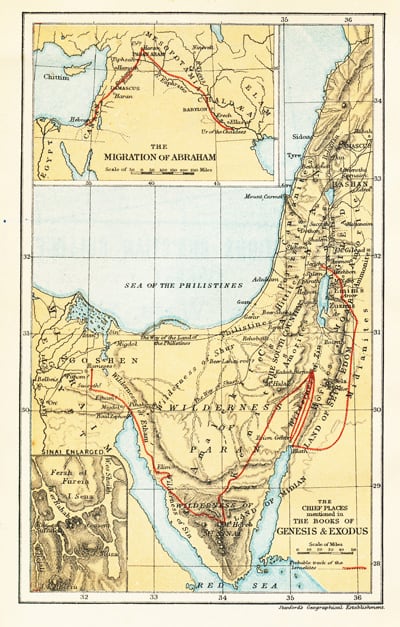 Professor Archibald Sayce’s Patriarchal Palestine applies the (then) recent archaeological discoveries in Babylonia and Assyria to illustrate the biblical accounts of Genesis. The frontispiece map is particularly helpful, so I have extracted this and made is available as a separate download at various resolutions. This title, kindly provided by Book Aid, is in the public domain.

A few years ago the subject-matter of the present volume might have been condensed into a few pages. Beyond what we would gather from the Old Testament, we knew but little about the history and geography of Canaan before the age of its conquest by the Israelites. Thanks, however, to the discovery and decipherment of the ancient monuments of Babylonia and Assyria, of Egypt and of Palestine, all this is now changed. A flood of light has been poured upon the earlier history of the country and its inhabitants, and though we are still only at the beginning of our discoveries we can already sketch the outlines of Canaanitish history, and even fill them in here and there.

Throughout I have assumed that in the narrative of the Pentateuch we have history and not fiction. Indeed the archaeologist cannot do otherwise. Monumental research is making it clearer every day that the scepticism of the so-called “higher criticism ” is not justified in fact. Those who would examine the proofs of this must turn to my book on The Higher Criticism and the Verdict of the Monuments.

The following article is now available on-line in PDF:

The Newly Discovered Version of the Story of the Flood

In all probability there is no phenomenon of nature described in the Old Testament which has attracted so much attention as the account of the Deluge, though many may say, that the sun standing still at the command of Joshua would be found to enter into competition with the great cataclysm of earlier date. Since the reading of the first Babylonian version of the Flood – story by the late George Smith about thirty-six years ago, however, interest has centered rather in that wide-spread catastrophe than in the cause of the great Israelitish leader’s victory; and this interest in the account of the Flood has rather increased of late years in consequence of the discovery of other versions – a second one by George Smith when engaged on the Daily Telegraph Expedition; another still, to all appearance, by Father V. Scheil, a few years ago, and still a fourth, by Professor H. V. Hilprecht last year.

The most complete version of the Babylonian account of the Flood is the first one here referred to. This document forms the eleventh tablet of the Gilgames series, and, as fate (or Providence, if you will) would have it, this portion of the legend is more perfect than any of the remaining tablets – twelve in number – of the series. La yard, Rassam, G. Smith, have all contributed, by the fragments they discovered, to its completion, and the last-named recognised and adjusted, within finite patience, practically the whole of the fragments (one little piece only fell to my share during the time of my employment at the British Museum) of which that eleventh tablet is composed. It is pleasant to think that one of our own countrymen was able to do such a good piece of work, and thus lay the foundation of a really trustworthy text of these important documents, besides attending to numerous fragments of tablets in almost all the other sections of Assyro-Babylonian literature.