The works of Air Commodore P.J. Wiseman [1888-1948] enter the public domain this year. This is the first of two of his books that I will be online. Air Commodore Wiseman was the father of the biblical archaeologist Professor Donald J. Wiseman.

A new endeavour is made in the following pages to trace the Biblical creation narrative back to its source and to ascertain why it is divided by six “evenings and mornings”.

Many will doubt whether it is possible-after centuries of discussion-to write anything new about this first page of the Bible. I take however the same view as Butler did when he wrote (Analogy II, iii), “Nor is it at all incredible that a book, which has been so long in the possession of mankind, should contain many truths as yet undiscovered”.

There are several undiscovered truths regarding this first narrative of creation which hitherto have remained unnoticed. One of these is so important, yet so simple and unquestionable, that our failure to recognise it is all the more surprising, seeing that this oversight has created considerable difficulties resulting in continued misinterpretation, causing the narrative to be rejected by so many. 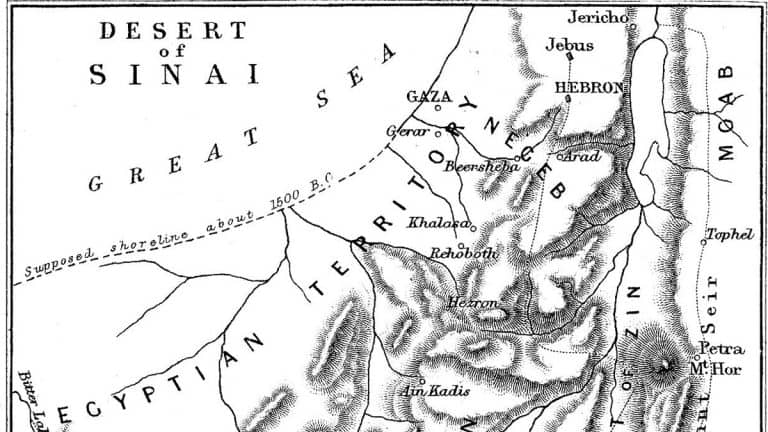 Today’s free book is an introduction to Bible geography, by Claude Conder, who applies knowledge gained through his work with Palestine Exploration Fund in Israel. My thanks to Book Aid for providing a copy of this public domain title for digitisation. Claude Reignier Conder, R.E. [1848-1910], A Primer of Bible Geography Founded on the Latest…

Today’s free book is one of the classics of Biblical archaeology, The Chaldean Account of Genesis. Wikipedia notes of the author: In 1872, Smith achieved worldwide fame by his translation of the Chaldaean account of the Great Flood, which he read before the Society of Biblical Archaeology on 3 December and whose audience included the…

The following article is now available on-line in PDF: G.R.H. Wright, “Simeon’s ancestors: or the skeleton on the column,” Australian Journal of Biblical Archaeology 1.1 (1968): 41-49. Click here to read.

This is the second of Air Commodore Wiseman’s books that entered the public domain this year. My thanks to Book Aid for providing a copy for digitisation. P.J. Wiseman [1888-1948], New Discoveries in Babylonia About Genesis, 5th ed, 1949. London & Edinburgh: Marshall, Morgan & Scott, 1936. Hbk. pp.143. [Click to visit the download page…

The following article is now on-line in PDF: W.J. Dumbrell, “Role of Bethel in the Biblical narratives from Jacob to Jeroboam I,” Australian Journal of Biblical Archaeology 2.3 (1974-75): 65-76. Click here to read.